Home
Board of Trustees
Penny Mills 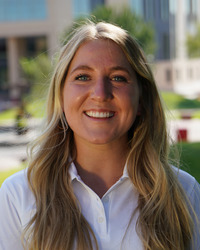 Penny Mills grew up in Orem, Utah as the youngest of five children. She attended Vineyard Elementary, Lakeridge Jr. High, and Mountain View High School. She loves music and has sung with a number of performance choirs which included a tour with one stop at Carnegie Hall. As a sophomore in high school, Penny was a starting defensive player for the Lacrosse team at Timpanogos High School in 2012 (a team composed of students from Mountain View, Orem and Timpanogos because there weren’t enough players from any one of the schools alone to field a full team). This team won the Division 2 Lacrosse State Championship. She loved the competition. Penny was the Senior Class President and also a member of “Bruin Crew” (a student service organization) at Mountain View High.

Penny loves to work with people and help them find and live their dreams. She has worked in the food industry, and retail, but her favorite job was for Alysse’s Bridal & Formal in Provo, Utah. She was a Bridal Consultant and also one of the store “buyers” for the formal wear sold by Alysse’s.

Penny loves to travel, experience new things while seeing the wonders of the world. She has visited Africa, Ireland, France, Italy, Austria and many other places. She plans to continue her world wide exploring after Covid-19 clears.

She has a solid history of great leadership, working professionally and in service organizations with a wide variety of people. Penny has served in a number of church leadership roles. She was a youth leader for Young women in her neighborhood before serving a mission for the Church of Jesus Christ of Latter Day Saints in Eugene, Oregon. She had the opportunity to teach the people of Oregon, and had the responsibility to train new sister missionaries. She has been the president of the Women’s Relief Society in local congregations twice since her mission.

Penny is studying Communications, with an emphasis in Applied Leadership here at Dixie State. She loves DSU because it is a place where you can blaze trails to your own dreams, and live them. She loves the great leadership spirit here. Penny got involved on campus as the Administrative Assistant to the Vice President of Student Life, and most recently before becoming Student Body President, she served as the Vice President of Service for DSUSA. Stop by Penny’s office in the Gardner student center and say hello. She loves meeting new people and wants to hear your ideas for how to make Dixie even greater than it already is!