Home
Board of Trustees
Colleen Kvetko 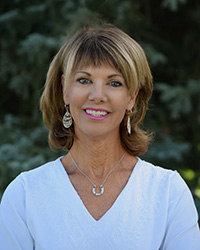 Colleen Kvetko was appointed to the Board of Trustees in 2018. She moved to St. George in 2015 after retiring from the banking industry.
Ms. Kvetko and her husband Kirk grew up in the Cleveland area before moving to Cincinnati, Ohio, and Naples, Florida. She is a seasoned banking executive with more than 40 years of experience in the industry. In Naples, Florida, Ms. Kvetko was President, CEO and Chairman of Fifth Third Bank; President and CEO of a local community bank, Shamrock Bank; and is currently a Bank Director for First Florida Integrity Bank.

She was named by the America Banker Magazine as one of the “Twenty-Five Most Powerful Women in Banking”, ranked tenth in 2004 and fifth in 2005. Ms Kvetko has always given her time and talent to the community organizations including the YMCA, Chamber of Commerce, Economic Development, Naples Daily News Advisory Board, Florida Bankers Association, Sheriff Advisory Committee, Hodges University Board of Trustees, and Ave Maria University Board of Trustees, to name a few.

Ms Kvetko is currently on the Board of Directors of First Florida Integrity Bank in Naples, Florida; the Board for PAWS in Heber City/Midway, Utah; and is a volunteer at Snow Canyon State Park in Ivins, Utah. She has been married to Kirk for 40 years and they reside in St George, Utah.